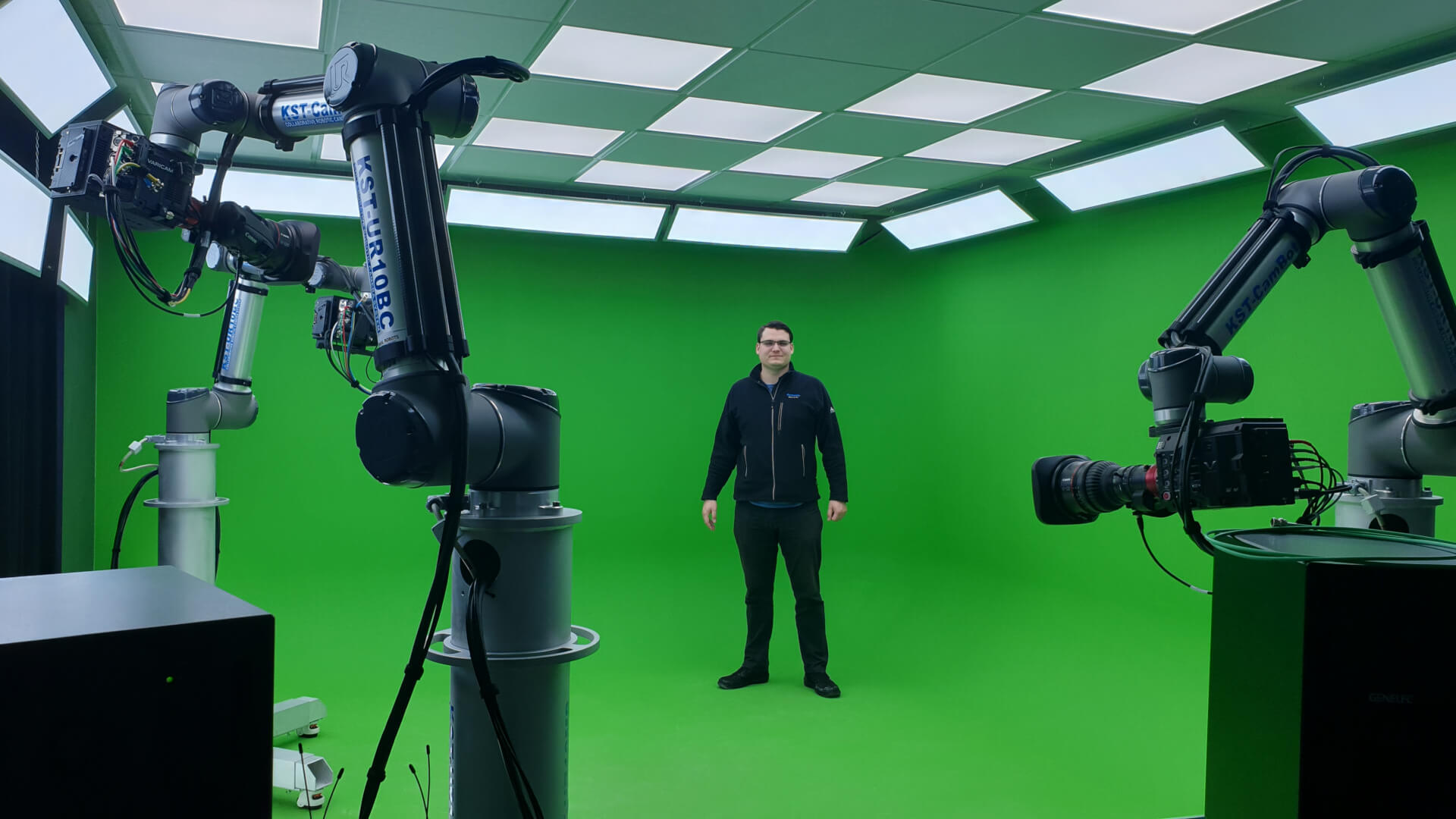 Pioneering TV production technology in service at the Bundeswehr

Pioneering TV production technology in service at the Bundeswehr

The first Virtual Reality Studio of the German Federal Armed Forces has just been accepted by the project management of the BAAINBw U5.6 (Federal Office for Equipment, Information Technology and Use of the German Federal Armed Forces) after a realization time of almost 3 months. In the real estate of the , KST GmbH realized a highly automated, for the studio production area, for the time being in a temporary usage area until the completion of the actual studio building.

A ~6×6 m green area was built. Painted in the VR studio color RealGreen, this L-shaped cyclorama in combination with the extremely homogeneously illuminated 5900k KST-VR light set is a basic requirement for a successful VR workflow. Here the sophisticated KST-VR-Studio-Construction-System is used.

The control room area is located right next to it. On two 4.2m studio system tables of version 3, also from KST production, the four operative main function areas graphics, sound, video technology/mixing and automation with corresponding operator, measuring and monitoring technology have been set up.

Among other things, the brand new Reality-VR Version 9.2 of Zero Density, based on the Unreal-Engine and working on three HighEnd-Render-Channels, is used. The most technically advanced real-time VR system on the market today is characterized by extreme photorealism and outstanding performance, even in UHD. Reality’s revolutionary, Difference Keying process not only ensures excellent keying results, but also maximum interaction by the presenter in terms of shadow casting, reflection behaviour and situation colour grading.

Graphically, the workflow based on the Unreal Engine is operated on an additional high-end graphics workstation, which also controls on-air graphics and VR remote elements.

Three Panasonic VariCamLT 4k cine cameras, each mounted on KST-UR10BC camera robots, were used to match the quality of the high VR system level. The RAW signal from the cameras is received directly by the render engines in the UHD workflow and processed by the Reality Difference Keyers, ensuring maximum production quality.

The central control component is the modular KST-CamBot.system, which ensures a high degree of automation of the camera workflow with the modules CamBot.Control, CamBot.routing, CamBot.remote and CamBot.robot. The operator interface is the proven KST-CBR-RP1 Remote-Panel and the KST-CBR-Pro Software with intuitive touch-screen operation.

Through the multiple security levels of the KST-CamBot.system, which starts with the collaborative UR10 robots and ends with the CamBot.collision-detection module, the system ensures trouble-free human-machine cooperation in the TV production area.

In addition to automating the robotic camera workflow, CamBot also ensures the correct routing of the UHD mixer and the 32×32 12G-SDI Kumo matrix from AJA via the SwitcherLink protocol.

Record/Ingest/Playout is handled by the Avid FastServe system, which provides four-channel recording/playback in UHD/4k or eight-channel in FullHD. In addition to several Media Composer and ProTools PostPro workstations, the system is connected via 10Gbit to the central storage of the Avid PAM system Interplay.

For audio, a Midas M32R mixer console is used in combination with Shure ULX-D microphones. For recording and playback to/from the PAM system interplay, the signals are embedded into the SDI Stream Em/Deembedded using AJA HI5-12G and HA5-12G converters.

All central components were integrated into the server room one floor below, so that noise and heat emissions in the control room and studio are reduced to a minimum.

The system will be handed over to the site and put into operation at the end of March 2020. Currently the training of operators and users is in progress in the KSTacademy and the KST-Innovation-Center.

The VR studio for ZOpKomBw in Mayen is a typical example of successful, manufacturer-independent cooperation. KST’s intensive cooperation with innovation partners such as Panasonic and Zero Density has played a major role in the success of such development-intensive projects.